Not An Exit has been terrorizing music lovers since 1992 (on and off; OK, mostly off). Jon Wardell and I met as employees of Toys "R'" Us in Totowa, NJ in 1989. We shared a lot of musical tastes, warped senses of humor, and left-handedness, and eventually became close friends and began hanging out together outside the workplace. At my basement bedroom in my parents' home in Passaic (we soon dubbed it 'Underground Studios'), Jon commented on a metal sign that I'd taken from the store during its last renovation, which had been hanging over the store's entrance and proclaimed 'NOT AN EXIT.' We both jokingly agreed that it would make a great name for a band.

I did have an electric guitar and two keyboards, some unlikely aspirations, and the memories (and recordings) of the Hellevators... but I didn't have much talent. Jon also had a guitar and a keyboard, though he had apparently given up on seriously playing either some time before. We discussed some ideas for musical projects: at the Underground, we rehearsed a two-part harmony version (in the manner of Lennon and McCartney) of the Doors' "The Soft Parade", which, sadly, was never recorded.

In April of 1992, I moved into an attic apartment, which quickly became known as 'Abode Studios.' Perhaps my new-found independence gave us the impetus we needed, because two months later, we recorded a different Doors tune, "Not To Touch The Earth" (in an electronic/industrial style) as well as our own song "Dead," and Not An Exit was born.

That fall, Jon and I created seven original instrumentals, ranging from the primitive, Native American-influenced "Columbus Was A Dope" (first tentatively titled "Rice, Bread Crumbs, and Red Pepper," after the found object 'instruments' Jon used for rhythm), to the pompous and somewhat foreboding "Recovering Catholic," to the aptly titled "Amateur Blues" (a simple tune that had been playing around in my head for two or three years). Several of these tracks were recorded very spontaneously, with little or no planning or direction. We didn't go through more than a handful of takes per song, either, preferring spontaneity. "Dead" was given an instrumental treatment as well; over the next year or so, we managed to produce five different versions of this song! And that was just the beginning...

In those early days, I was playing most of the music, and so we decided to start looking for other band members. To that end, Not An Exit put together a little booklet, explaining who we were, who some of our influences were (artists as varied as KISS, the Who, Jerry Lee Lewis, the Byrds, the Dead Kennedys, Elton John, Peter Gabriel, and the Velvet Underground were mentioned), and what we were looking for in bandmates. There were no responses.

Jon's "A Better Place" was recorded around this time as well, first using my two Yamaha keyboards, then with a gargantuan hulk of an old Italian organ my parents had bought me on a whim at a flea market. It had a great sound, and I sometimes wore a pair of Ray Manzarek-style rectangular shades while playing it, to Jon's amusement; it did look and sometimes sound like something the Doors would've used. Unfortunately, the instrument started malfunctioning within a few months, and I eventually had to get rid of it, but not before utilizing it again for "Dead 2." We were finding ourselves going through numerous takes at this point; both of us being jokers, we'd often start each other laughing during recording, usually unintentionally, and yards of tape and hours of time were wasted. Still, fun was had!

Not An Exit's first big creative wave crested in 1993, however. Jon and I both had interests outside of music, too, not to mention day jobs, and it was a few months before we got together to record again. We each wrote a few songs, and I put a few short demo pieces to tape, but it was as though both of us were going through dry spells. Then, in March of 1994, we recorded a cover of Little Willie John's "Fever" during a bluesy kind of session. I had recently acquired a used bass guitar from a neighbor, and for most of the session, I played it through a heavily overdriven bass amp, calling the distorted results "monster bass." It was featured on "Fever," and also on the other surviving outtakes from that session: two short demos of a re-worked "Dead", and our brief, irreverent blues outtakes "I'm A Man" and "Front Door Man."

"Fever" was the last full song recorded by Not An Exit for quite some time. I hastily composed and recorded the solo instrumental "Victory Samba" to celebrate Brazil's World Cup win later that year, and I worked up a few demos and short covers on my own, too, though nothing substantial. Then, for a short while between late 1994 and early '95, Not An Exit became a trio of sorts. Scott Kochman, an associate of Jon's, had become interested in joining the band; as he had some music theory knowledge, and could read and write music, we were intrigued by the idea. However, months went by before the three of us were ever together in one room, and I jokingly began referring to Scott as the 'alleged drummer.' He actually ended up buying a synthesizer instead of a drum kit, and we three did a little work on "A Better Place" (which again went unrecorded), but in the end it became evident that he didn't quite gel with us musically. In any case, Jon was doing a lot of artwork professionally in '95, and I had started editing the Extreme, and so we didn't work on music together for another while.

Late in 1996, after moving to a basement apartment (christened 'Down Below Studios'), I experienced a burst of creative activity and recorded a few covers on my own, as well as the original "Human Thing." My musical career then fell back into the same slump as NAE's. Jon and I finally returned to the 'studio' together in the summer of 1998 and started tinkering with the idea of making some intense, industrial-esque music. Some concepts were recorded, but never followed up on; a few of these ideas may be resurrected for a Not An Exit project in the future, and/or for Jon's budding solo work. I recorded new guitar and keyboard parts for the basic "Dead (live)" tracks (I'd never been completely happy with my original guitar on that recording) and mixed it together as "Dead (again)," providing the band with yet another version of our signature tune. Once I'd moved to the Nutley Nuthouse, though, and we once again lived in close proximity to one another, Jon and I began meeting more regularly to work on new music. A demo of "East," with a vague Asian feel provided by both our keyboards, was recorded late in 1999, and in January 2000, we returned to the scene of the crime by recording "Dead (finally)," as well as another abbreviated take on "Dead" which was intended as the theme to a cartoon idea that had been floating around for a few years. I wrote a song called "Swingin' in the Park (After Dark)," and we recorded it later that same year; I created my own solo version three years later. "April Fool's Day" and "Dead (inside)" (yes, we returned to the scene of the crime yet again) were done in mid-2001 as well.

Jon bought a bass guitar (as did I) and eventually decided to try his hand at the guitar again, too, so now we distribute the instrumentation more equitably. In mid-2002, I moved to central Jersey, about an hour away, but that still didn't prevent the occasional recording session. We spent some time working out the tune "Not An Exit," though the music was never really finalized, and the lyrics I wrote weren't quite what Jon had in mind; as a result, I recorded my own version in 2004, though that doesn't preclude Not An Exit from finishing its own rendition of "Not An Exit" at some point. We were roommates in Lyndhurst for two years, which gave us more opportunities to jam together, though recording was as slow-going as ever; my own debut collection of songs, Joy in the New, was released during this time, in August 2004. Jon's since moved again, but the distance hasn't put the kibosh on NAE entirely. In 2014, he and I formed a band called Greta's Unmentionables, which was definitely a fun experience, even if we never completely finished a song or performed anywhere (we got together in a rehearsal studio); it lasted about two years, and Jon and I still got together a few times to work on NAE music in the meantime. In the years since, we've started some work on updated versions of our old songs "Recovering Catholic," "A Better Place," and "Lies," as well as doing some noodling around on new, untitled (and titled) projects during our sporadic sessions. A session together in early 2015 led to much of a new song called "No Looking Back" getting worked out. So, yes, you may eventually get to hear some new Not An Exit tunes... 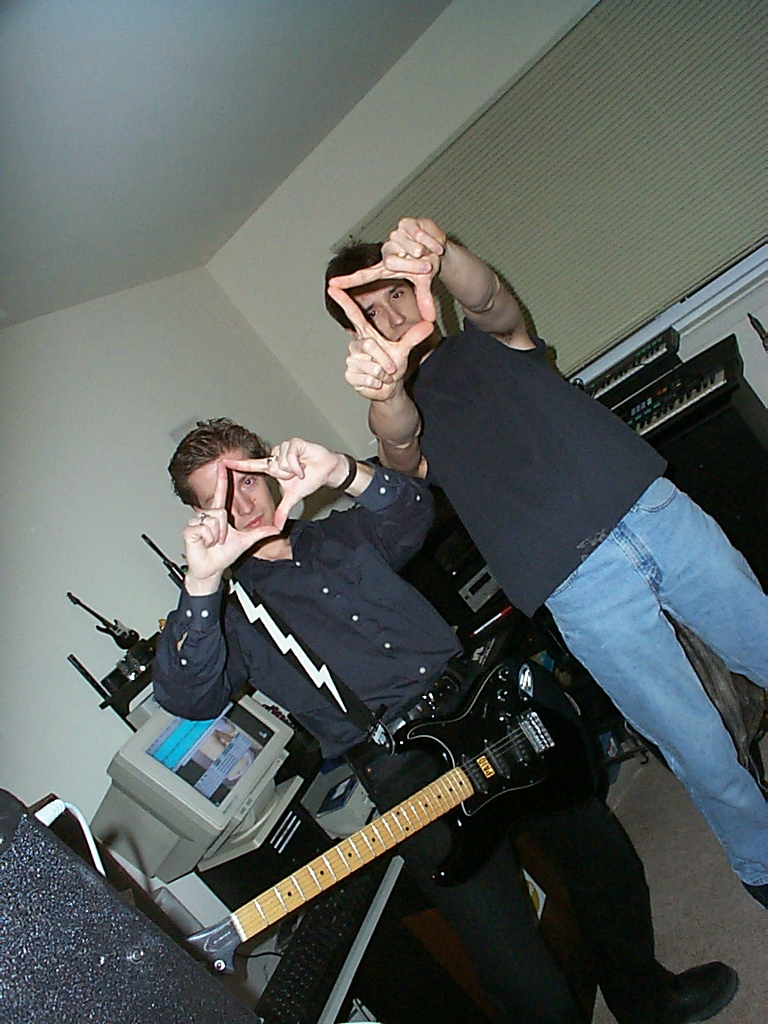