In the summer of 1987, just before my senior year of high school, I attended the Dean's Summer Scholars Program at Rutgers University in New Brunswick, New Jersey. We were high school students from all over the state; sixty or so of us stayed on campus at Tinsley Hall during the week, and we obtained college credits for the summer courses we took. Pretty cool, huh?

Early in the program, during the first week or two, I walked through the lounge on my side of the fourth floor (the genders were segregated by floor) and encountered a songwriting session, or rather a song-parody writing session. Mike Perler, Jason Tiscione, and Dave Roberts were sitting around coming up with alternate lyrics to "New York, New York," but their song was about the then-cesspool known as Newark, New Jersey. I contributed a line, maybe two, to their project, and somehow the four of us became the Hellevators.

The moniker stemmed from a nickname the rickety old elevator in the dorm had received somewhere down the line; I don't know who first called it that (or even if the name originated with us Summer Scholars), nor do I remember who suggested that we name ourselves after it. In any case, having a name didn't mean much for a while. The song was sung in the lounge a handful of times by some members of the group, and Mike and I set out to write parodies to some other songs, but basically we just basked in the glow of "being in a band." Considering I was the only original member with an instrument (a simple Yamaha keyboard which I soon brought to the campus) and the barest amount of talent, we were a little too impressed with ourselves.

Mike and I came up with "Out Of Time," a slightly raunchy rewrite of Hall and Oates' "Out Of Touch," one morning at around 2 AM. That's the only explanation for it. Mike and Jason auditioned the song on two separate occasions in the lounge, and were each smacked by passing females for the lyrics; we scrapped the song. "Midnight Curfew," to the tune of Pink Floyd's "Another Brick In The Wall, Pt. II," was much more popular, and we actually recorded an a cappella version in the lounge, with Jason, me, and various friends contributing mouth-generated instrument noises. I guess we had a more woman-friendly image by then, because we acquired Sue Schleck as a second (well, first real) keyboardist.

But, there was trouble on the horizon for the Hellevators. Dave, whose ego was by now well-known amongst the Summer Scholars, was not cooperating with plans to get a group photo taken inside the Hellevator. He was also blowing off our practices, such as they were, and had not come up with any lyrics or even song titles lyrics since "Newark, Newark." Eventually, we confronted him and told him that there was no point to his being in the band if he wasn't going to be in the band. He apologized and promised to make more of an effort, but after a few days, Mike, Jason, and I realized that it wasn't going to happen. Jason suggested Satish Shah as a replacement; looking back, I don't know if we really needed a replacement, but, hey, whatever. ;) We approached him, and he was interested, so we left a note on Dave's door telling him that he was no longer a Hellevator.

Apparently, he didn't believe us at first. Dave walked past my room two days later and found us practicing inside. When told that Satish had taken his place in the band, he went a little ballistic, and had to be held back by a hallmate! I fired a watergun in his face (no, not the best way to defuse the situation), and he slowly cooled down, though probably not as a result. I think he may have stuck around and listened to us for a bit, but that episode marked the end of our relationship with Dave Roberts, though Sue remained on good terms with him. We wrote "We Got to Eat" (using the Go-Gos' music) as Sue's number, and I tackled "We Will Rock You" and came up with "We Dig Rutgers," a corny but honest theme song. Around this time, I also made my friend Barbara Aspeling our manager. Not that the title meant much...

I had become known as the Head Hellevator (in addition to the Vice God), but that title didn't mean much either. We were hardly the hardest working band in show biz! Sue was actually quite a decent keyboard player, but I wasn't, and we were the only two in the band with any semblance of talent anyway. Didn't stop us from deciding to compete in the Summer Scholars' talent show, however. We performed two sets of two songs each (the only songs we had, excepting the banned "Out Of Time"), and I also participated in a performance from "The Hitchhiker's Guide To The Galaxy" between sets with another troupe of friends. The Hellevators came in second place; not such a feat given our competition. Heh-heh... Far more exciting was the news Sue Schleck breathlessly gave me after the show: Jackie Bullard, the program coordinator, had attended the talent show, liked us, and wanted us to perform for Rutgers College dean James Reed! I convinced the others that it would be fun, and we told her that we'd do it.

Sergei Kango, a fellow Scholar and a prankster, decided one night to spray shaving cream on some of the guys who were sleeping either in the lounge or behind unlocked doors. Apparently, leaving shaving cream on for a few hours results in some uncomfortable burning! Luckily, I didn't get a faceful of cream, but Sergei did assault my radio/cassette player, which had been left out in the lounge. I awoke to find the player filled with the stuff, and it never played tapes quite right again. There was talk of revenge, and in fact a mob initiated an attempt, but in the end the worst he had to deal with was the Hellevators' rewrite of the Sergio Valenté jingle, "Sergio," in his 'honor.' Sue picked this time to threaten to quit the band over a salary dispute, a laughable concept (who was making any money?) but one which truly upset me. I didn't like the thought that she might really leave. I wasn't sure I could keep the band, such as it was, together without her. She 'quit,' then 'rejoined,' then decided she'd form her own spinoff band, the Escalators. She went so far as to make up ads looking for members, hanging some of them on my door to taunt me! I took it far too seriously, but we made up and she 'rejoined' the Hellevators once again.

It was decided (probably by me, but I can't say for sure) that in addition to performing at Dean Aid, the band was going to record a tape. Most ambitious of us... The live version of "Newark, Newark" from the talent show was used, as was the early, impromptu "Midnight Curfew," but we needed more. "Sergio" was put to tape, as were the band's first two songs. Jeff Carter, another Scholar, wrote the lyrics to, and sang lead vocals on, "Donald," written to Suzanne Vega's "Luka," a big hit at the time. The song chronicled Don Musacchio's late-night furniture-rearranging frenzy with his roommate Greg May. Time was running out, though, and I became agitated again. It was difficult to get everyone together to record, and one night, I became upset because the session was postponed yet again, as Jason was busy. Barbara fell into her role as manager and told the other Hellevators that they were going to be recording the next night. Somehow, we pulled it off, and even got some non-Hellevators involved as we finally recorded "We Got to Eat" and "We Dig Rutgers." After everyone left, I got to work putting everything onto a master tape while Barbara folded up the inserts I'd designed for the cassettes. Then I put to tape my own "Closed Box To Hades" (it was me singing badly over "Stairway To Heaven" ;) while Barbara stood outside the door, keeping people out. I made duplicates from the master tape, and we eventually sold about thirty of 'em. At some point, we also had a group shot or two taken, though for some reason it wasn't done in the Hellevator but rather next to the Pepsi machine. Maybe we wouldn't have gotten a good shot of the five of us through the 'vator's doors...

And, of course, there was Dean Aid. To his credit, I don't think Dean Reed flinched once. I know we did "We Got to Eat," "Midnight Curfew," and "We Dig Rutgers," but I'm not sure what else we may have performed. It was fun, at any rate, and how many bad teen parody bands can claim to have played for a college dean? It was a nice finish to a strange career.

The five Hellevators have never been together in the same place since. I've seen, spoken to, or corresponded with various members over the years (two of them are my sporadic Facebook friends now), but the fabled reunion was not to be. Mike Perler and I briefly discussed the possibility of a musical venture two or three years after Rutgers, but that came to naught as well, and I haven't heard from him since. I re-recorded "Newark, Newark" in lounge lizard style as the Lone 'Vator back around 1990-91, and I wrote a few new songs and came up with a plan to record an ad for a spurious "greatest hits" package. I did want to try to put together a twenty-year reunion in 2007, but I suppose it was best to let this sleeping dog lie. Although we could always shoot for the thirty-year... 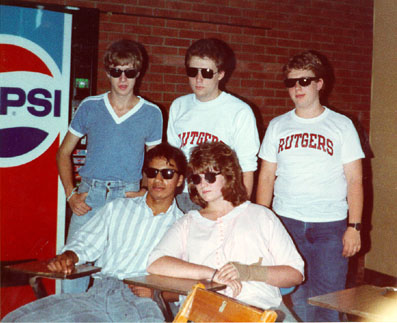 The Hellevators in 1987
Top, left to right: Andersen, Jason, and Mike
Bottom: Satish and Sue 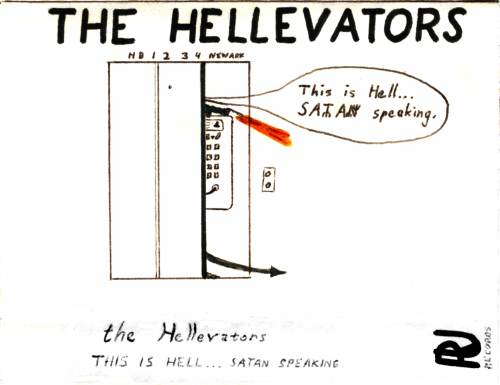 My cover art for the cassette-only release