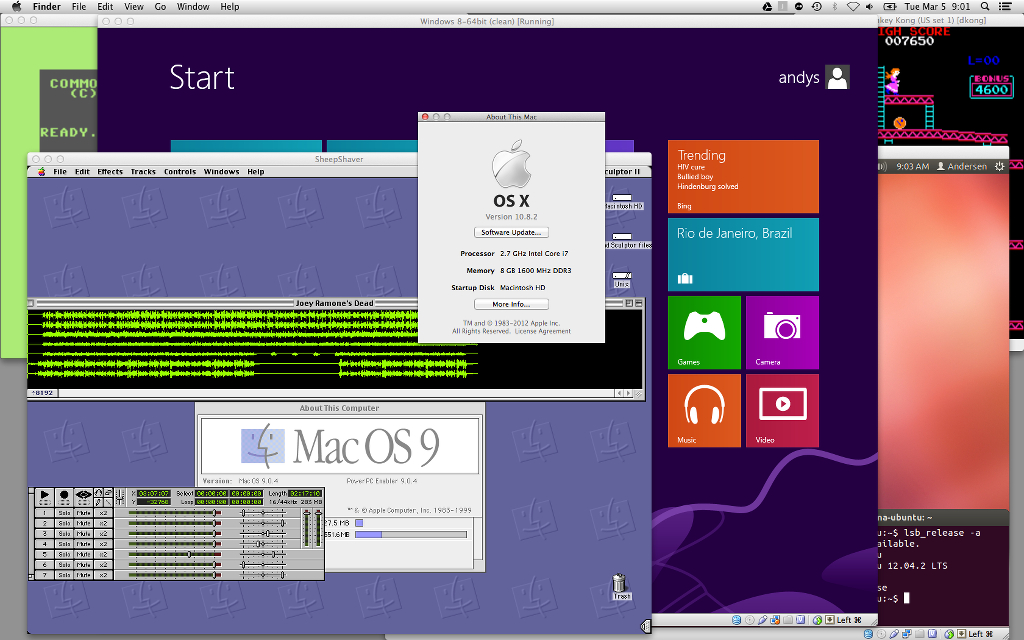 I've been referring to myself as the Twenty-First Century Schizoid Man (after the King Crimson song) since early 1999; finally, the first half is as accurate as the second. But then there's also Bad Religion's "21st Century (Digital Boy)," and so maybe I'm more of a mashup of the two, the 21st Century SchizoDigital Guy.

I've been a technophile since long before 1999, of course. I got my first computer, a Timex Sinclair 1000, sometime around 1982. No hard drive, no sound, no color... It was soon upgraded to a Commodore VIC-20, and a few years after that, I got a Commodore 128. These machines were a lot of fun and fascinating with which to work, but I didn't settle for just buying and playing games on them. I learned BASIC and the concepts behind programming, then set out writing my own simple games, date calculators, plotting and graphing programs... the first worthwhile word processor I ever used on the VIC-20 was one I wrote myself, from scratch, that handled page numbers, subscripts, superscripts, and footnotes with ease. At the time, I couldn't find one on the market for Commodore computers that could do everything I wanted, so I just made one. When I took a computer class in my junior year in high school (just looking for more math credits), I became an unofficial teacher's assistant, helping out with students less computer-literate. As we were working with Commodore PETs, I was already familiar with the hardware and the version of BASIC.

In late 1993, I began thinking about getting a "serious" computer. I'd done a lot with the 128, and had even put its simple (but impressive for its time) synthesizer to use by manually 'sequencing' the rhythm section from "Rainbow Connection" painstakingly, one note at a time, and accompanying the resulting music on guitar. One of the last, best software packages I got for the Commodore was GEOS, a graphical user interface, but I didn't play with it enough and never quite realized its potential. I did realize, however, that the computer was an antiquated relic now for most modern uses, and there was so much more I could do with a new, more powerful computer. I toyed with the idea of getting an Amiga, since I already liked Commodore and had heard great things about those computers, but this was around the time that the company started having financial difficulties. Eventually I decided on a Macintosh instead.

I had of course heard good things about Apple as well. The Mac's dominance in audio applications at the time probably played a role in my decision, though I didn't really utilize its capabilities in that area for two years or so. Having worked on a Windows (3.11 for Workgroups) box for a few months at my place of employment by then, I could see that Mac was where it was at (and that Microsoft had seen that, too, in its plundering of the GUI), so in January of 1994, I purchased a Macintosh Performa 550, which was promptly dubbed VAL 9000 (in honor of HAL 9000 and his 'sister' SAL 9000, from Arthur C. Clarke's books).

In retrospect, with a little more research, I could have picked a better Apple. The PowerPC-based Power Macintoshes were just being introduced, and while many of the Performas were being touted as PowerPC-upgradeable, Apple soon pulled the plug on that program for several models, including the 550. After about three years, the 160 MB hard drive also started feeling a bit tight. (Funny, now that I've got USB flash drives and SD cards with fifty times that capacity (and more!)...) With some additional RAM and storage, and a lot of time and patience, I accomplished much with VAL.

In the fall of 1998, I bought one of several used no-name PCs my employer was selling cheap. Yoko's 100 MHz Pentium processor, while lethargic by then-current standards, ran circles around VAL's 33 MHz 68LC30, even with a Microsoft operating system. Each computer had its own Zip drive, though like so many others, I eventually had to deal with the click of death. Less than a year later, in August of 1999, I purchased a used Power Macintosh 6100/60 through Yahoo!'s auction system. It had a respectable 60 MHz first-generation PowerPC chip inside. Paulene was named for an old X song; yes, my computers are all female, aren't yours?  ;-)  I bought a CD-R drive for the PC, which was a definite plus. Finally, I could store data on CDs when the five hard drives I now owned started getting full. I also began acquiring other older computer hardware around this time, eventually adding to my collection two more Power Macs and a Commodore Amiga 3000, Amiable, which could use some upgrades but is in fact functioning well. For nostalgia's sake, I picked up a used Commodore 128 (dubbed Lisa, to the probable chagrin of the late Steve Jobs) and a 1571 floppy drive, too; now I can play "Hitchhiker's Guide" and "Leather Goddesses of Phobos" on the original hardware.

I looked the impending twenty-first century firmly in the eye when Dana, my Graphite iBook SE, arrived via Airborne Express on October 10, 2000. Her 466 MHz G3 processor blew away the three older computers' brains put together. With 320 MB of RAM, an internal CD-ROM/DVD-ROM player, an external FireWire CD-R/W drive, a FireWire scanner, an iMic audio interface for recording, an Airport (Wi-Fi) card, and several (virtualized) operating systems from which to choose, this was one lean, mean, computin' machine. The iBook was my main computer almost from the day I received it until I replaced it with a PowerBook in 2005, and I don't know how I survived without a laptop; I've worked on my Web site, my writing, my music, and documents for my job on the bus and train to and from work and elsewhere. I had to replace the iBook's battery twice, but otherwise I had no serious issues with Dana, or her successor, Trinity. The 12" PowerBook G4 is still a very usable computer, loaded with commercial and open source software and 1.5 GB of RAM.

So, yes, I now have fifteen functioning computers (not counting the iPhone 6 and the Google Nexus 7 mini tablet), covering a wide range of platforms and OSes. In addition to the boxes mentioned above, there's a Sun SPARCstation, a Silicon Graphics Indy, two iMacs (though one isn't booting), an ancient Quadra, a Dell PowerEdge SC420, and more. Most of them can get on the Internet if I plug 'em in. Why do I have so many? Because I can, and because I happen to like computers and operating systems and learning how they work. Even the ones with command-line prompts.

I do my audio recording with GarageBand and a FireWire M-Audio Ozonic MIDI keyboard controller and audio interface plugged into my current computer, a MacBook Pro called Minerva, and I also utilize Sound Sculptor Pro and Audacity for editing. A Zoom H2 portable digital recorder comes in handy sometimes, too. I've got a few effects pedals for my guitars and a couple of amps into which to plug them, and an old Alesis SR-16 drum machine that still gets use once in a while. Outside of computers and music gear, I've also been known to play the occasional game on my PlayStation 3, or to watch TV and movies on an older Apple TV or an Amazon Fire TV Stick. I do need to unplug from time to time, and I wouldn't break into a cold sweat if I had to spend a day completely offline and with no electronic toys, but modern technology is a big part of what I do. And some older technology as well.